Hottest Places in the UK

The Isles of Scilly have the highest mean annual temperature in the UK of 11.5 degrees Celsius (52.7 degrees Fahrenheit).

Not far behind are coastal parts of Cornwall, where many low-elevation sites average above 11 °C (52 °F).

Cornwall and Scilly maintain the UK's highest year-round average not by getting really hot, but rather by not getting really cold. Nighttime lows at Scilly throughout winter typically stay above 5 °C (41 °F).

The ocean moderates temperature extremes and keeps these places warm during winter. Cornwall juts out into the sea at the southwest corner of Great Britain. The Atlantic Ocean borders Cornwall to the west and north, and the English Channel to the south. 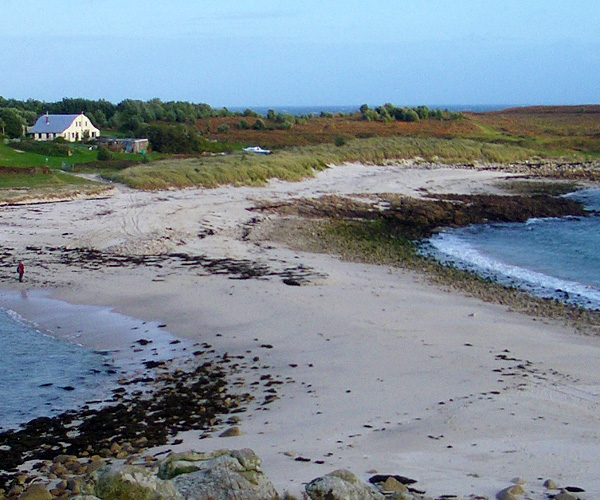 Hottest place in the United Kingdom – Isles of Scilly.

The Isles of Scilly rise in the Atlantic about 40 kilometres (25 miles) west of the tip of the Cornish peninsula. The ocean around Cornwall and Scilly has the warmest temperature of any water off the UK coast.

The highest that summertime temperatures usually get on the Isles of Scilly is just 19 °C (66.2 °F). Meanwhile, some inland parts of southern England average highs of over 20 °C (68 °F) in summer.

Other places in Great Britain that regularly reach above 21 °C (69.8 °F) during summer months include Oxford, Stratford-upon-Avon, Yeovilton and Cardiff.

London's temperatures get a boost from the dense concentration of large buildings that create the city's own climate, making London an urban heat-island.

But even London's green oasis at the Kew Royal Botanic Gardens can get really hot. Kew Gardens is one of the few places in Britain where the temperature has gone above 100 degrees F (37.8 °C).

London's urban heat-island effect is most noticeable at night from late fall to early spring. During cold spells with little wind, the nighttime temperatures in central London can remain 5 degrees C (9 degrees F) above those in the surrounding suburbs and rural areas. The buildings soak up heat during the day and release it back into the city at night.

Warm Places in the UK During Winter

Places along Britain's coast, where the ocean moderates air temperature, stay the warmest in winter. The warmest waters off England lie along Cornwall and around the Isles of Scilly where the sea has a mean annual temperature of 11 to 12 °C (52 to 53.6 °F). Winds blowing in off the ocean heat Cornwall and Scilly during winter.

The Isles of Scilly have the balmiest winters in the UK, typically getting air frost on just two days a year. Weather stations define air frost as when the temperature at 1.25 metres (4.1 feet) above the ground falls below freezing. Air frost usually occurs on the Isles of Scilly when an easterly wind overrides the ocean influence by bringing in cold continental air.

Places in the UK that also get through winter with little frost are the coastal communities of Tenby in South West Wales, which averages 10 days a year, and St. Mawgan in Cornwall, where normally 14 days a year have air frost. Other sites commonly having less than 20 days of frost in winter lie along Britain's south and east coasts, and include Teignmouth, Eastbourse, Aberporth and Valley.

London's warm city air is no match for winter's warm Atlantic winds. The city gets much frostier than the coast. Greenwich reports an average of 29 days a year with air frost. Other places that get hot in summer, get even colder than London in winter. Stratford-upon-Avon and Yeovilton have over 50 frosty days a year.