Why Orangutans Are Endangered

For the two species of orangutans found on the islands of Sumatra and Borneo in southeast Asia, mature tropical rainforests are essential to their survival. Orangutans live entirely in trees. The reason why orangutans are endangered can be summed up with two words: habitat loss.

Pressure to destroy mature forests and orangutans comes from multiple sources. The demise of an orangutan population often begins with building a road through pristine forest. A new road brings in entrepreneurs and settlers keen to exploit the tropical forest and clear land. Loggers, farmers, poachers and pet dealers all play a role in the endangered orangutan's decline.

Deforestation over the last few decades has devastated orangutans. The number of orangutans on Borneo dropped by over half in the last 60 years. On Sumatra, the orangutan population is just one-fifth of what it was 75 years ago. Sumatran orangutans are the most endangered great ape in the world.

Unfortunately, their future is bleak. New roads are planned for forests in the Singkil Swamps Wildlife Reserve on northern Sumatra. These rich forests support the world's highest density of orangutans. Also living in the reserve are Sumatran tigers, Sumatran rhinoceroses and Sumatran elephants, all endangered animals.

Logging is the primary threat to orangutan habitat. Loggers have cut trees at a rapid pace during recent years. In just 25 years, from 1980 to 2005, 80 percent of Indonesia's old-growth forests were logged. Each year on northern Sumatra alone, forests supporting 1,000 orangutans were lost during the 1990s. 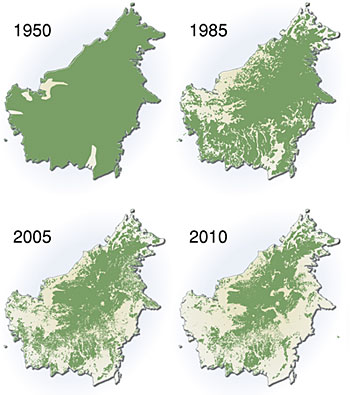 This map shows how rapidly Borneo has become deforested since 1950. The green area represents forest.

About three-quarters of orangutans now live outside of protected areas in rainforests open to logging. But a park or wildlife reserve provides no guarantee that the forests won't be cut.

Illegal logging continues at rampant speed on a large industrial scale, both inside and outside of parks on Borneo and Sumatra. For instance, over half of Gunung Palung National Park on Borneo, an important orangutan habitat, was logged by 2001. In another case, illegal loggers on Borneo moved into an area of productive peat-swamp forest, after it was already legally logged, and eliminated half the population of 13,000 orangutans in seven years.

Some orangutans can survive selective logging, where just a few trees are cut and most are left standing. Taking mature trees reduces the supply of fruit that forms the bulk of the orangutan diet. Sumatran orangutans are especially dependent upon forest fruit and so even with selective logging, their population drops by 60 percent.

Bornean orangutans of the northeastern subspecies (Pongo pygmaeus morio), have stronger jaw bones and other features that allow them to eat a more fibrous diet of bark and leaves. This adaptation appears to enable the subspecies to survive in lightly logged forests.

Fires in 1997 and 1998 on Borneo killed an estimated one-third of the orangutan population in a year. One peat-land fire covering 400,000 hectares killed probably 8,000 orangutans. Forests covering 90 percent of Kutai National Park were destroyed by massive fires in 1983 and 1998, and the park's orangutan population declined from about 4,000 individuals to just 500.

While logged forests might sustain a few orangutans, converting rainforest land to agriculture entirely eliminates orangutan habitat. Forests, especially the low elevation ones that best support orangutans, have been rapidly deforested and transformed into oil palm plantations and food crops. 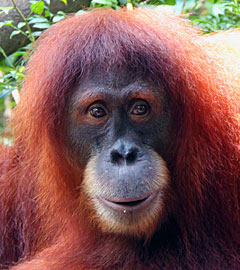 Palm oil is a cash crop exported for making foods, cosmetics and biofuel. The area on Borneo planted to oil palms expanded from 2,000 square kilometers in 1984 to 27,000 in 2003. Palm plantations have taken over prime orangutan habitat in the eastern lowlands of Sabah and on the plains between the Sampit and Seruyan rivers in central Kalimantan, among other areas.

On northern Sumatra, where the last stronghold of critically endangered Sumatran orangutans remains, refugees from both civil war and the tsunami have moved into the forest, establishing settlements and farms. People fleeing civil war have settled inside protected areas, cleared forest and converted land into food crops and palm oil businesses. The 2004 tsunami sent survivors inland, into the rainforest looking for higher ground to resettle on and wood to rebuild with.

Where agriculture sprouts, the forest edge becomes a conflict zone between farmers and apes. In Sumatra, clearing has left small forest patches encircled by farms and palm oil estates, trapping isolated groups of orangutans. The stranded orangutans resort to raiding fruit from villagers' fields along the forest edge. Farmers persecute the orangutans they consider pests, shooting some.

More orangutans get shot on Sumatra and Borneo once logging opens up access into the forest for poachers. Villagers kill orangutans for bushmeat and traditional medicines. At one Borneo national park, Bukit Raya, poaching has removed most of the orangutans. In other areas, poachers have exterminated orangutans completely.

With orangutans being slow to mature and reproduce, their populations cannot sustain even moderate losses from poaching. Scientists estimate that killing any more than one percent of Sumatran orangutans or two percent of Bornean orangutans a year will wipe out a group.

When mothers are killed, any orphaned infants usually end up sold on the black market for pets. In 2004, for instance, authorities in Thailand seized 100 orangutans taken from Borneo.

Orangutans rescued from animal dealers sometimes get handed over to ape orphanages in Malaysia and Indonesia. Some captive orangutans can be rehabilitated by teaching them skills for living in the wild and gradually reintroducing them to forest life.

In this way, over 1,000 orangutans have been released, but probably fewer than half survive long on their own. It still remains to be seen whether rehabilitated female orangutans who reach maturity know enough about mothering to successfully raise their young.

Many confiscated orangutans, though arrive at orphanages tragically abused and in poor condition. Some suffer blindness, paralysis or missing limbs. Permanent disabilities like these destine an orangutan to life in captivity as it would never survive living free.

Poaching or capturing wild orangutans is illegal. Yet military, police and local government officials are often the ones poaching orangutans in Sumatra. Officials have even confiscated captive orangutans and then sold the animals themselves on the black market.

National governments do have laws to protect endangered orangutans and conserve wildlife parks. Clearly though, the laws have too little impact. Throughout orangutan territory, people at multiple levels of government and society lack the desire, awareness and capacity to follow and enforce conservation laws. This ultimately explains why illegal logging and poaching continue unchecked, further endangering orangutans.

Hugo Ahlenius, cartographer. 2006. Extent of deforestation in Borneo 1950-2005, and projection towards 2020. UNEP/GRID-Arendal Maps and Graphics Library.