Two islands in southeast Asia — Borneo and Sumatra — are the only places where orangutans live.

Sumatra is part of Indonesia, while Borneo is divided among three countries. Bornean orangutans live in both Indonesia and Malaysia. Overall, Indonesia is where about 80 percent of the world's wild orangutans remain.

Sumatran orangutans (Pongo abelii) come from the provinces of North Sumatra and Aceh (Nanggroe Aceh Darussalam) on the northwest part of Sumatra. They are found mainly in the rainforests located north and west of Lake Toba and the city of Medan.

About 88 percent of the island's orangutans survive in the Leuser Ecosystem, a conservation area that covers 26,000 square kilometres (10,000 square miles). Over a third of the Ecosystem is set aside as Gunung Leuser National Park. But since the Park is mainly high mountains, reaching 4,000 metres (13,000 feet) in elevation, and orangutans only survive below 1,000 metres (3,300 feet), most orangutans live outside the Park. In between the mountains, orangutans live in the foothills, valley bottoms and coastal swamps.

Clearing of forests, has left isolated forest patches that separate Sumatra's remaining orangutans into a dozen groups. Half the groups probably contain so few individuals, that the population won't survive for long. Just three groups have more than 1,000 orangutans.

Bornean orangutans are divided into three subspecies, each occupying different parts of the Island. All the subspecies are found in Indonesia and two also live in the Malaysian portion of Borneo. The map of Borneo, below, shows colored in orange–brown, where orangutans lived as of 2004. 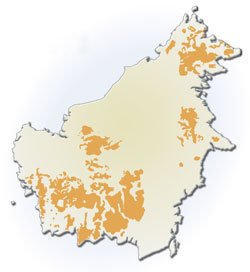 Where orangutans live on Borneo is colored in orange–brown.

Northwestern Bornean organutans (Pongo pygmaeus pygmaeus) live in southern regions of the Malaysian state of Sarawak. A few are also across the border in Indonesia's West Kalimantan province.

At the northernmost corner of Borneo lives the northeastern Bornean subspecies (Pongo pygmaeus morio). It is concentrated in the Malaysian state of Sabah and its range also extends southwards through East Kalimantan province in Indonesia.

The central Bornean subspecies (Pongo pygmaeus wurmbii) lives only in Indonesia, in the provinces of West Kalimantan and Central Kalimantan. With a total population estimated at 35,000 individuals, this is the most numerous of the three subspecies, accounting for about two-thirds of Borneo's orangutans.

Orangutans are restricted to forests that produce plenty of fleshy fruits, which form the main part of the ape's diet. They keep to tropical forests where trees from the Dipterocarpaceae family dominate.

Prime orangutan habitats are in the mature, lowland forests. The great apes thrive in the peat-swamp forests of poorly drained river basins, and in valley-bottom forests along rivers.

Orangutans also live in dry forests that cover the foothills of mountains. But the apes do not extend far up mountainsides. They rarely live above 500 metres (1,640 feet) elevation on Borneo and above 1,000 metres (3,300 feet) on Sumatra.

Where Orangutans Once Lived

Orangutans currently exist in just a small remnant of their former range. Orangutans once roamed throughout a huge part of southeast Asia. Their range extended from Sumatra and Borneo to the Himalayan foothills, covering 1.5 million square kilometres (580,000 square miles).

About 12,500 years ago, orangutans began to disappear from mainland Asia. Areas became unsuitable for orangutans when the environment changed and people began farming. By the year 1600, orangutans had ended up restricted to just Borneo and Sumatra.

Orangutans originally lived in lowland areas throughout the two islands, except for southeastern Borneo. As large swaths of tropical forests on these islands were cleared, particularly during the last few decades, the great apes vanished. Orangutans have recently vacated northwest Borneo and the eastern lowlands of Sumatra.